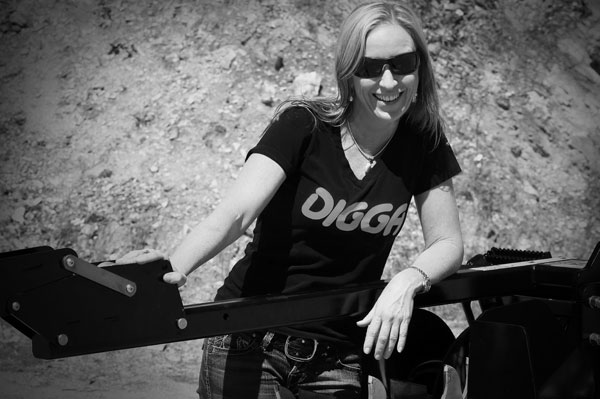 Digga Australia is a success, no matter what measure is used. The privately Australian-owned manufacturer and supplier of high-quality machinery attachments stands tall.

The company employs over 200 people across three countries. The main factory, a 12,500m2 manufacturing facility in Brisbane, houses a wealth of precision high-tech robotics, machining centres and fabrication equipment. Additional manufacturing facilities in Australia are located in Sydney and Melbourne.

Primarily exporting to North America and Europe, Digga has additional manufacturing branches in the UK and opened its latest facility in 2013 in Dyersville, Iowa, USA. Digga supports an extensive professional dealer network across the globe.

Aside from the manufacturing, there’s a healthy research and development department dedicated to ongoing improvement of current product lines and development of new and innovative products.

There’s a lot more this company can deservedly boast about, but it’s clear it’s a juggernaut. Steering that juggernaut, steadily and with increasing momentum, is the irrepressibly cheerful Chief Executive Officer, Suzie Wright.

“I was christened ‘Suzie’ ... My dad named me after his Suzuki motorcycle.”

GROW AND GO - “I was christened ‘Suzie’,” laughed Wright. She laughs a lot. “My dad named me after his Suzuki motorcycle.” Born and bred on the Gold Coast, Suzie’s father started in the earthmoving industry, moving onto bridge building and piling work. Suzie, a qualified rigger, worked on her father’s barges as a youngster, and, not wanting to attend university, moved to Sydney where she worked in the Entertainment industry building stages and lighting rigs for international entertainment acts and conventions after finishing high school.

An injury put a stop to climbing and heavy lifting and prompted a move to restaurant management, which went well enough for several years. But, while still in her mid-20s, Suzie moved back to Queensland and again joined her father’s business, building the extension of the boardwalk around the Brisbane River. It was at about this time, the mid-1990s, Suzie met future husband Stewart Wright of Digga Australia. Digga supplied augers to her father’s burgeoning business.

“Stewart and I married and I supported him as he was travelling around the world growing the business,” remembered Suzie. “The company was a pretty reasonable size by then. Auger drives and trenchers were Digga’s core products, and we kept adding product lines after that. When I joined the company there were branches in Brisbane, Sydney, Melbourne and New Zealand, and we started exporting in 1996-97. We opened England in ’98 and were exporting to the USA with a major OEM deal in ’97 as well. By then I was more involved in the marketing of the business,” said Wright. “We moved to the USA in 2000 and set up operations in Kentucky, and it was a very rapid learning process. I was thrown in the deep end, so to speak (laughs). I was heavily involved with the international operations and their growth. We struck up a deal with a major attachment supplier in 2001 to distribute the products and closed that plant down.”

“We moved to the USA in 2000 and set up operations in Kentucky, and it was a very rapid learning process. I was thrown in the deep end, so to speak (laughs).”

DEALER DELIGHT - As Suzie became more pivotal in the growing business concerns, Stewart was able to focus on the research and development side of the business, his passion and interest. How did husband Stewart feel about Suzie stepping into the CEO’s position in 2004? “He was very pleased,” chortled Wright. He wasn’t in the CEO position, so there was no friction there, and he was able to step back from the day-to-day operations and concentrate on product development. This had always been his passion with the company.”

After over a decade in the role, Wright has overseen Digga Australia during a time of unarguable success across several fields. What does she see as a personal highlight? “We’re a proud Australian manufacturer and one of the largest projects we undertook was building the Octal Street factory in Yatala. We were in a company-owned factory in Staplyton with five factories and a main road running through the middle of us, and we just couldn’t get any more productivity out of that setup. It was at its limits and we needed room for growth."

"We’d done a lot of work with Federal and State governments promoting manufacturing and assisting with promoting this region, and they helped us find the land we eventually purchased. We bought just before the property boom, which was ideal, and we were able to merge five separate factories into one. The original stage was 8000 square metres. Within 12 months we had to expand and added another 4500 square metres. It’s all under one roof and state of the art."

"We manufacture from raw material right through to completed product: cutting, machining, fabrication and assembly. The land slopes, so we were able to design the facility with the offices overlooking the factory. We also have a couple of acres of land so our dealers can run their testing and demonstration days here. There’s even barbecue facilities!” she smiles. “It wasn’t designed just for the operations. It was also designed to support our dealer network. They have been pivotal to our growth and success.”

GEARED UP - Digga has a huge range of products, but it’s the consolidation of operations and the manufacture of the first five-post gear set that Suzie hails as a milestone for the company. “Digga was the first in our industry worldwide to develop the five-post planetary gear sets in our gearboxes. Every other manufacturer in the world was using threepost. Our goal was to produce maximum power as compact as possible,” she explained, “And that allowed us to create the most compact range of auger drives on the market today.”

“Digga was the first in our industry worldwide to develop the five-post planetary gear sets in our gearboxes. Every other manufacturer in the world was using threepost. Our goal was to produce maximum power as compact as possible ... ”

“We then started working with Eaton Hydraulics and developed our own range of hydraulic motors. We utilised Eaton technology inside, while designing the top and bottom to better suit our application and add benefits to our customers. It made the gearboxes even more compact. We gave that design back to Eaton and they now produce that motor for us and support it around the world. In our industry, we’re the only company designing and manufacturing gears both for our own use and major OEMs. Everyone else buys components from different suppliers and assembles the parts.”

That was the start of a process that Wright cites as Digga’s biggest single achievement so far: a 500,000 newton-metre drive. Utilising the five-post design, but obviously a lot larger, these drives are mainly used for installing large screw anchors. The power generated by the gearbox is amazing enough, but the power generated from such a compact assembly has Suzie fair glowing.

A LONG WAY TO GO - Stewart and Suzie are no longer married, but are still great mates and still enjoy working together. Digga is still growing and going strong, and Suzie has no real thoughts of retirement or ‘moving on’. “I don’t think I ever see myself retiring,” said the always-cheerful CEO. “I love the good and the bad, I love the crazy lifestyle, the industry, and the challenges it brings. I cherish the people I work with and learn something new every day. I don’t do bored very well, so I think I’ll stick to being the leaders in boring – pun intended!” she laughs.

“I don’t think I ever see myself retiring ... I love the good and the bad ... the crazy lifestyle, the industry, and the challenges it brings. I cherish the people I work with and learn something new every day. I don’t do bored very well, so I think I’ll stick to being the leaders in boring – pun intended!”